Etsy Italia Team - beauty is (hand)made in Italy: EIT for Greece: photo source Etsy Italia Team is twinned since a a few years with Etsy Greek Street Team . This 'pact' was born on an impulse, ...
posted by antigoni at 12:28 PM No comments:

Etsy Greek Street Team: March Giveaway: Win a hand-woven baby owl doll fro...: My dear friends, I wish you all to have a lovely springtime! Αγαπημένοι φίλοι, καλή Άνοιξη! This is my first post in the team's...
posted by antigoni at 12:20 PM No comments:

Etsy Greek Street Team: January Giveaway - Win amazing earrings from Antig...: Hello lovely friends, Γεια σας αγαπητοί φίλοι, Happy New Year!!!! I wish to each and everyone of you have a great year filled with l...
posted by antigoni at 7:26 PM No comments:

Hello again :) It seems that I am falling in love with air dry clay and coloring this natural material with dry pastels is so fun and the feeling is so childish... :)

I made some dome earrings. They are totally hand formed so their shape is nice but not 100% perfect, but this is that I love the most with them. 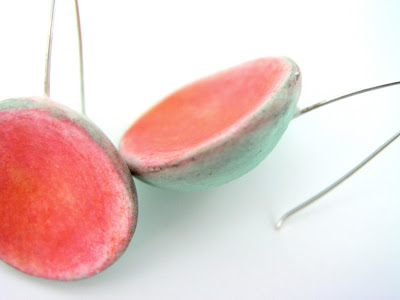 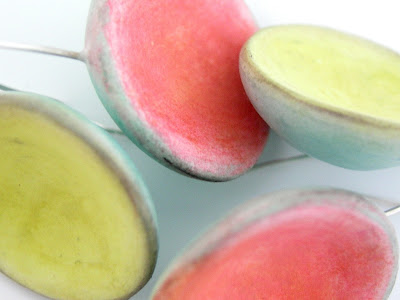 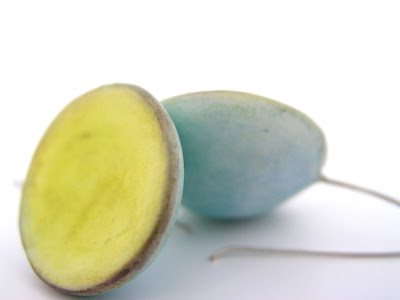 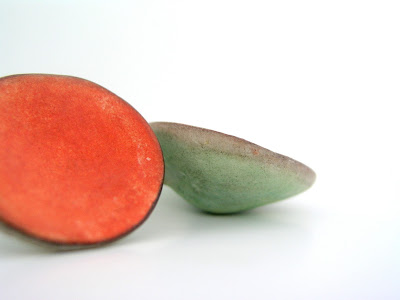 thank you for looking ♥
posted by antigoni at 8:33 PM 1 comment:

A few days ago my son ask me to make a small elephant pendant for his girl friend. 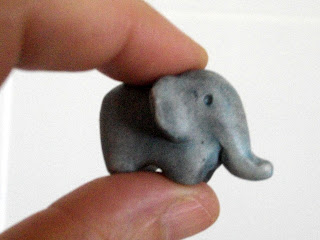 I made this one with polymer clay, I don't have photos from the finished necklace to post but it was really very cute and actually it was the inspiration for my new bird pendants made from air dry clay :) 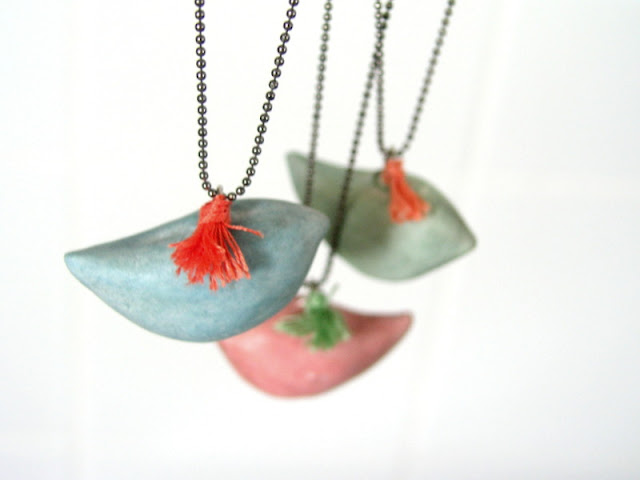 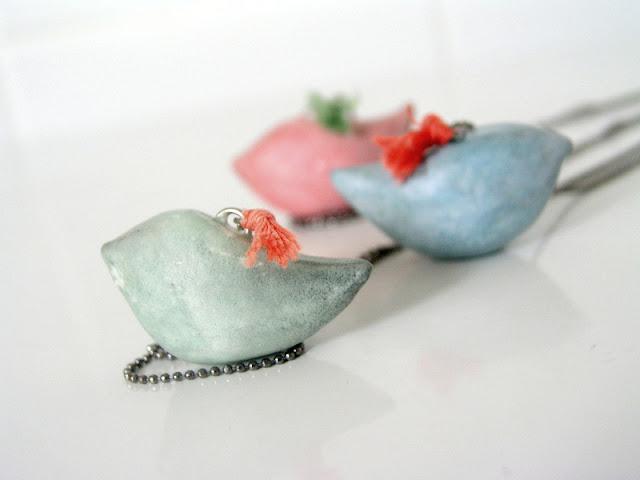 Although I am very happy with them and I love the thread addition, is a nice "spark" of color ... I have a dilemma .... chain or silk cord ? I wish for a quick decision in order to list them on my etsy shop... but I am afraid that usually I am not a "quick decision" person .... :)

Although I start my creating life making jewelry, my wish to do things with clay is still here and maybe stronger than ever because now I feel a little bit more confided.

Started with polymer clay which is a wonderful material with millions ways to work with, but I need to get in touch with natural material as well.  I hope that next autumn  I'll able ... at last... to attend seminars for making pottery. For now I am "playing" with dry air clay and it's really a great fun! 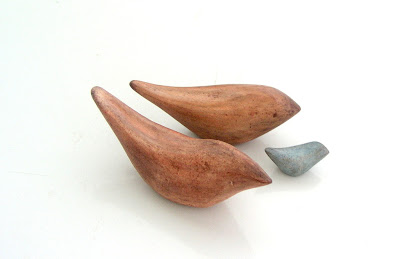 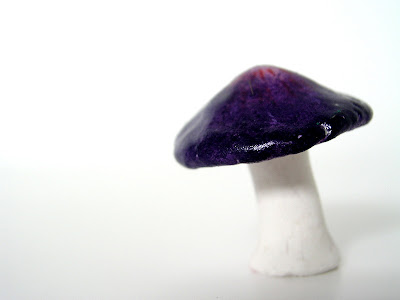 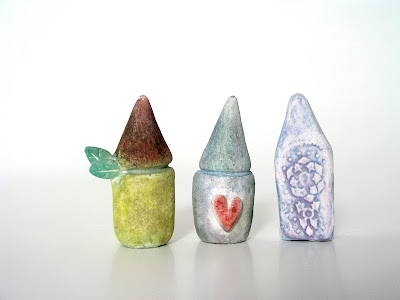 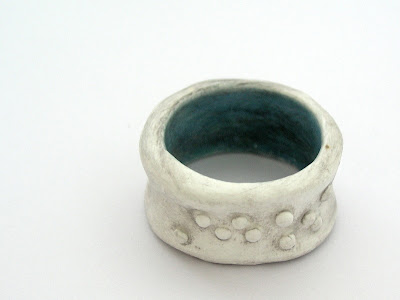 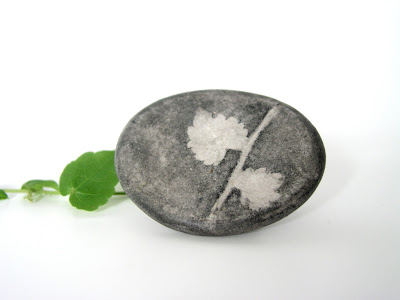 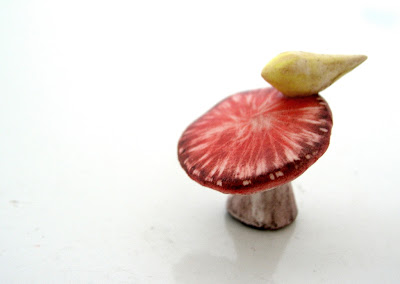 posted by antigoni at 2:18 PM No comments:

GEORGICA POND: Easter Inspiration: I'm probably a little late giving you some Easter inspiration, but just in case you're as disorganised as I am and those Easter post...
posted by antigoni at 6:55 PM No comments: 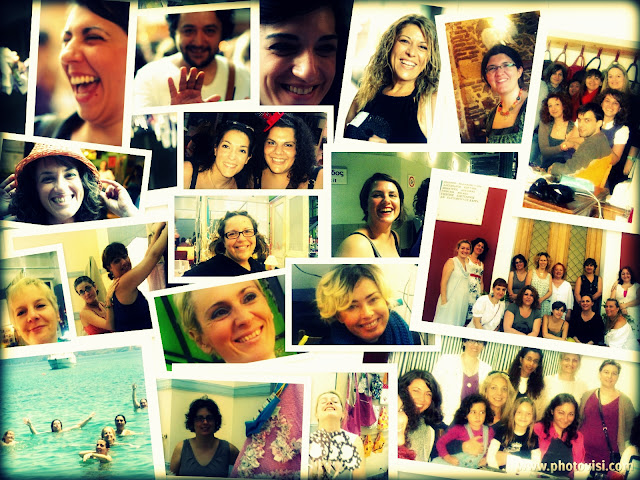 When I opened my little etsy shop, I became a member of a great team, the Etsy Greek Street Team.

Anyhow, I wouldn't have made it this far if it weren't for the help of this team. Some sweet persons have helped me out, some just said a good word, some did nothing more than make me laugh! Well, that is something isn't it? Make you laugh I mean. Have you ever laughed so hard in front of a monitor screen just by reading some lines in a forum? Well I have! And I do, almost every day in our chat thread.

This is a team of people like me in many ways. They love handmade and they love to talk about handmade!!!  My kind of persons! "

After reading Akamatra’s post about Etsy Greek Street Teams’s 4rth anniversary I realized that I could say just the same words, that I have the same feelings! And since anniversaries is usually a reason to review things.. I thought about my etsy story

I joined Etsy on January 2008 as a buyer and after 4 months I made the big decision to sell my jewelry on my own etsy shop J  Antigonidesigns. Of course as a newbie I was trying to find my way in etsy joining forums. I was surprised by the vivid and supportive etsy community.  I’ll never forget the help I got from people who really did not know me, they had nothing to get from me … they just gave their help expecting no return… !

That made me feel until now that etsy is not just a marketplace but maybe the most precious and supportive community for crafters all over the world!

To make a long story short, soon I discovered the European team.. ok I thought this is almost locally :)))
Of course I joined  and  got my first “lessons” about team work. There I met  a few Greek etsy sellers too and soon the idea of an Etsy Greek Street team became a reality.
Started with 35 members .. growing to 1000 now … and still growing!

Today I realize how much my life changed because of Etsy!!!  Not only as an seller but as a member of etsy community  too I learned  so many things.  My creativity benefited my confidence got a great boost and  most importantly I made good and strong new friendships.

Now, after 2,5 years neglecting my role as an etsy seller (for personal reasons) I am ready for a fresh new start! Not only with my Antigonidesigns shop but with a second one too Antigonicreations selling my polymer jewelry.

That mostly is due to Etsy itself but also to the Greek team that acts like psychotherapy.

People living in Greece at this time of crisis can understand how oxymoron it seems raising new hopes and starting fresh.
I know this is a common feeling among my fellow team members

We support each other even if means telling a joke just to keep us going amidst our daily troubles.

Maybe those who are into creating are by nature incurably optimistic and I am glad that through Etsy I have the opportunity to be among them and share a positive and hopeful perspective!!! 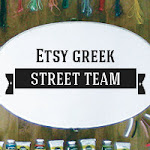 This is a Flickr badge showing public photos and videos from antigoni9963. Make your own badge here.

This is a Flickr badge showing public items from the ETSY GREEK STREET TEAM group pool. Make
your own badge here.